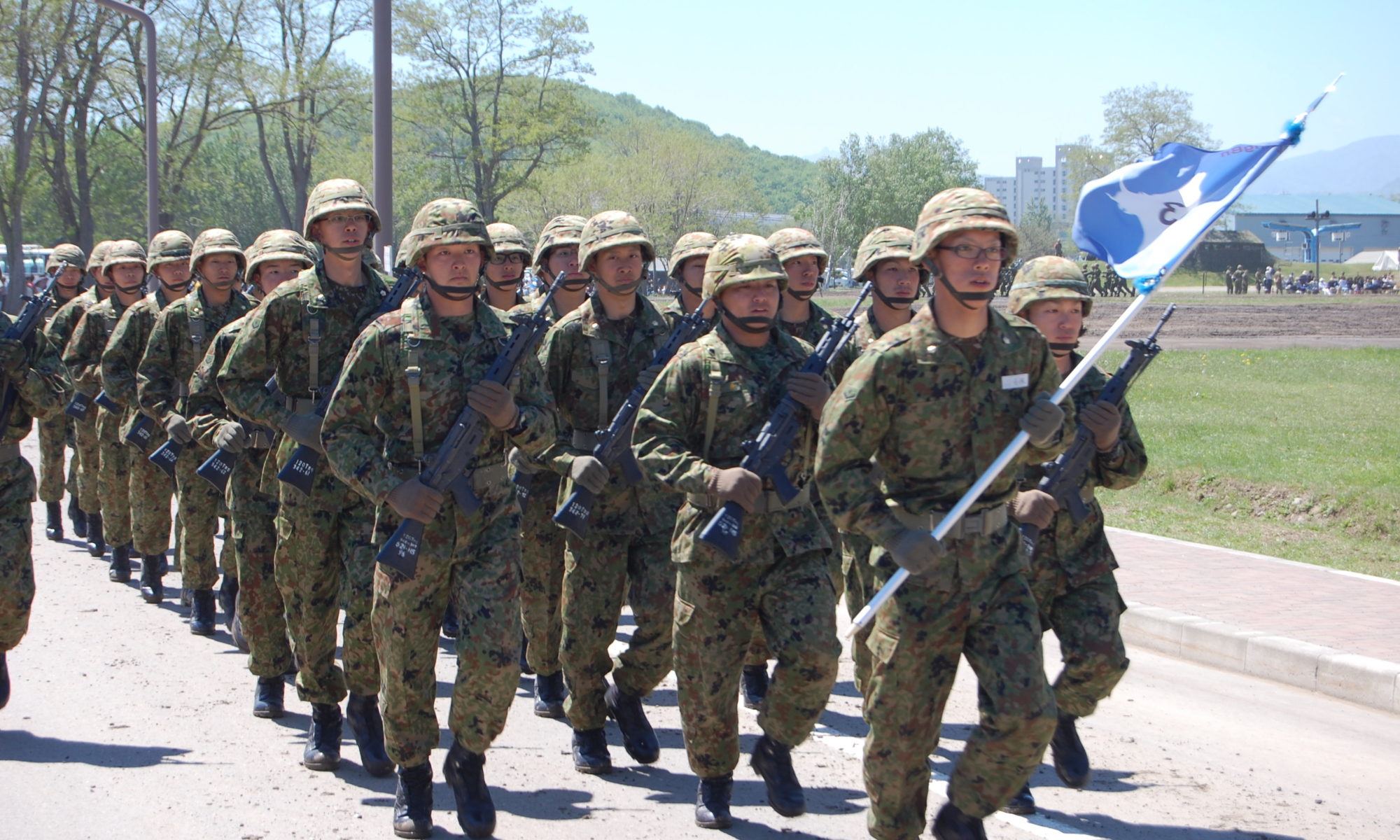 Japan’s position in the international community of nations continues to be heavily affected by its defeat in 1945. The Japanese Government’s pamphlet 60 Years, The Path of a Nation Striving for Global Peace sets out how Japan had tried to be a peaceful member of international society since then and a model member of the United Nations.

However, Japan’s role in the world remains tied to the US-Japan Security Treaty (1960). In particular, the treaty grants the US the use of land for military bases. This, and the strength of Japan’s own Self-Defense Forces, are laid out in the Ministry of Defense white papers Defense of Japan (White Paper), which are published every year. Of course, this being Japan, if you are not so interested in the pamphlet version you can always go for the manga version …! And here is the MoD video of their activities in 2018.

As you can see in this MoD video, Japan has various territorial issues. Chinese and Russian ships or planes sometimes enter Japanese territory leading to the scrambling of Japanese forces. This Ministry of Foreign Affairs site, “Japanese Territory”, outlines the three territorial disputes involving Japan and South Korea (Takeshima/Dokdo), China (Senkaku Islands/Diaoyu Islands), and Russia (Northern Territories/Southern Kuriles). This is part of a broader “History Issue”. People with an interested in these topics should take my class “The History Issue in East Asia” during the 3rd and 4th years.

Furthermore, the ongoing role of the SDF causes considerable domestic debate and controversy. See these two resources about the 1960 “Anpo” protests, and also the legal challenges to “collective self defense” in the 2010s.

Other Contributions to International Society

Japan also likes to position itself as a peaceful contributor to international society and politics. It has developed strong economic ties with the European Union. Here is a video about ASEAN on the Ministry of Foreign Affairs site:

Here are some of the activities of the Japan Foundation and Japan International Cooperation Agency (JICA):

In addition to JICA’s work, there are various Japanese NGOs, whose activities are discussed in the JICA report Understanding Japanese NGOs from Facts and Practices.

The result is that Japan is widely liked within the international community. Look at the Globescan Poll giving international views of Japan’s contributions to the world in comparison to other countries (after clicking the link, you need to scroll down a bit).

The above sources are mainly from government websites and paint a positive picture of Japan in the international community. Despite difficulties with its most immediate neighbours – China, South Korea, North Korea and Russia – Japan is widely liked and respected throughout the world. However, if this course has taught you one thing, then I hope it is this: Whatever materials we watch/read about Japan, we must always have a critical and inquiring mind. Are there other angles we must consider? What information has been included/omitted?

Otsukaresama deshita! I hope you have enjoyed the course …